bugzilla is a large legacy perl application initially developed at the birth of the world wide web. it has been refactored significantly in the 15 years since its release; however, some design decisions made at the start of the project carry significant technical debt in today’s modern web.

while there have been a large number of micro-optimisations over the course of bugzilla’s life (generally as a result of performance profiling), there are limits to the benefits these sorts of optimisations can provide.

this year has seen a lot of focus on improving bugzilla’s performance within mozilla, centred around the time it takes to display a bug to authenticated users. 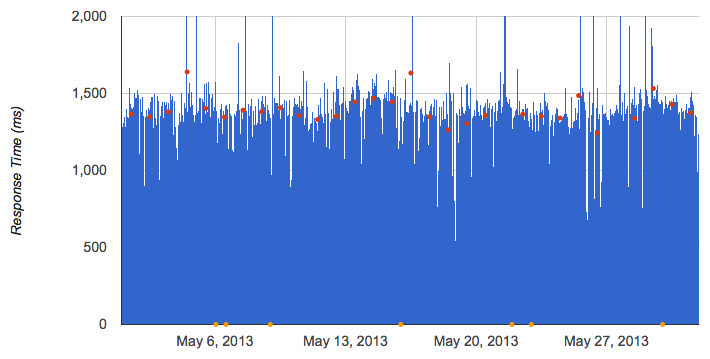 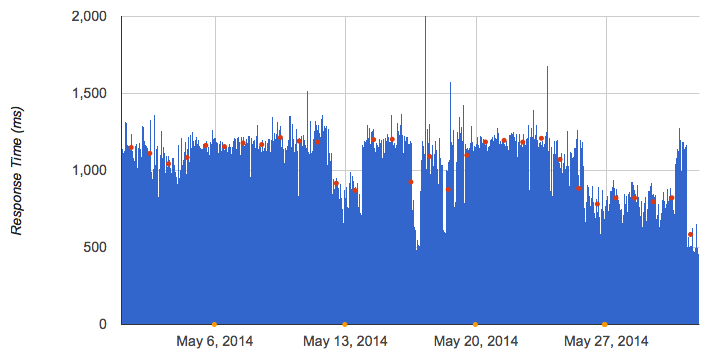 the design of a modern large web application is generally centred around caches, between the business logic layer and the data sources, as well as between the users and the user interface. while bugzilla has been refactored to use objects, database abstraction, templates, etc, it had zero caching capabilities. this coupled with completely stateless processing of each request meant that every byte of html returned to the user was regenerated from scratch, starting with a new connection to the database.

towards the end of 2013 i worked on implementing a memcached framework into bugzilla [bug 237498].

retrofitting a caching mechanism into a large extendible framework proved to be a significant challenge. bugzilla provides the ability for developers to extend bugzilla’s functionality via extensions, including but not limited to adding new fields, user interface, or process. the extensions system conflicts with caching as it’s possible for an extension to conditionally alter an object in ways that would render it impossible to cache (eg. add a new field to an object only if the current user is a member of a particular group).

some compromises had to be made. instead of caching fully constructed objects, the cache sits between the object’s constructor and the database. we avoid a trip to the database, but still have to construct objects from that data (which allows extensions to modify the object during construction).

code which updated the database directly instead of using bugzilla’s objects had to be found and rewritten to use the objects or updated to manually clear the cache entries. extra care had to be taken as returning stale data could silently result in data loss. to placate concerns that these errors would be impossible to detect, the caller of an object’s constructor must pass in a parameter to “opt-in” to caching.

in 2014 i built upon the memcached framework to support most of bugzilla’s objects [bug 956233], with the “bugs” object being the only notable exception. memcached also caches bugzilla’s configuration parameters (classifications, products, components, groups, flags, …) [bug 987032]. although caching the “bugs” object would be beneficial given its central role in all things bugzilla, it is highly likely that enabling this by default would break bugzilla extensions and customisations as a high proportion of them update the database directly instead of using bugzilla’s object layer. this would manifest as data which is silently stale, making undetectable dataloss a high probability.

memcached support will be released with bugzilla 5.0, but has been live on bugzilla.mozilla.org (bmo) since february 2014.

while profilling tools such as nytprof have often been pointed at bugzilla, bmo’s high number of concurrent requests and usage patterns time and time again resulted in performance optimisations performing worse than expected once deployed to production.

we took the decision to deploy instrumentation code into bugzilla itself, reporting on each http request, database query, and template execution. as bugzilla is written in perl, support was absent for off-the-shelf instrumentation tools such as new relic, so we had to roll our own data collection and reporting system [bug 956230].

the collector wraps specific Bugzilla::DB, Bugzilla::Memcached and Bugzilla::Template calls via subclassing, then reports data to an elasticsearch cluster. currently all reporting solutions are ad-hoc and involve running of scripts which identify the most costly database queries and templates.

this data identified areas of bugzilla which require optimisation or caching. examples include the optimisation of a single query which shaved 200ms (~15%) off page load times for most users [bug 993894], caching of all queries which read an entire table [part of bug 987032], and caching of user groups [bugs 993939] and settings [bug 993926].

we continue to revisit the instrumentation reports in order to guide further improvements.

improving the performance of a web applications isn’t limited to focusing on server-side execution speed.

due to bugzilla’s extensions we ended up in a situation where bugzilla was serving multiple small css files - on bmo we loaded 17 stylesheets as part of show_bug in comparison with 5 for an installation of bugzilla without any extensions installed.

similar to the issue encountered with memcached, extensions have complete control with regards to optionally loading stylesheets, which means any css concatenation and minification solution needed to be implemented at run-time.

[bug 977969] does exactly that - the template passes an array of stylesheets to load to bugzilla’s global header, where a hash of the array is used to find a unified stylesheet. simple minification is performed which dropped the stylesheet size from 54kb to 43kb on show_bug on bmo.

stylesheet concatenation and minification support will be released with bugzilla 5.0, and has been live on bugzilla.mozilla.org since may 2014.

in order to address performance issues caused by bugzilla’s use of the myisam table type, in march our DBAs upgraded our database cluster to mysql version 5.6. this was the result of analysis by the DBAs into replication and stability issues around our myisam table.

as mysql 5.6 adds support for fulltext indexing to its innodb table type, bugzilla was able to switch away from myisam. this immediately fixed the database replication issues, and provided a noticeable performance boost to searches involving comments.

the next large project is to update bugzilla so the bug object can use memcached on an unmodified installation without any non-default extensions enabled. for reasons previously covered it’s unlikely we’ll ship a version of bugzilla with this enabled by default, however this will allow sites to audit their own code (if any) and enable caching of the bug object if required.

we will build on the css concatenation and minification work to provide the same benefits to javascript files.

we periodically enable instrumentation and use it to identify the next set of targets for optimisation. this will continue for the foreseeable future.